Work in the Frantom group is focused on the field of mechanistic enzymology. In broad terms, mechanistic enzymologists seek a chemical understanding of how enzymes are able to dramatically increase reaction rates, perform unique and stereospecific chemistry, and provide mechanisms for regulation using a limited toolbox consisting of 20 amino acids and various cofactors. In order to answer these types of questions, we utilize a wide array of genetic, biochemical, bioinformatics, biophysical, kinetic, and spectroscopic techniques.

We currently have 3 ongoing research projects:
I. Investigating Functional and Regulatory Diversity in an Enzyme Superfamily
II. Investigating Mechanisms of Functional and Catalytic Diversity in Glycosyltranferases
III. Conformational Dynamics and Allosteric Regulation During Stress Response Metallofactor Assembly
I. Investigating Functional and Regulatory Diversity in an Enzyme Superfamily
Supported by NSF MCB-1254077
As a long-term research goal, the Frantom laboratory looks to understand how allosteric and catalytic mechanisms evolve and work together in multi-domain enzymes. Advances in understanding the dynamic nature of enzymes have identified networks of amino acids involved in inter-domain communication in allosteric systems failing to exhibit large structural changes upon effector binding. However, the underlying mechanisms are not well understood at the molecular level. This lack of understanding creates a major stumbling block for the manipulation of allosterically regulated enzymes, such as engineered biosensors, through modular design methods.

Our approach to this problem utilizes “genomic enzymology” where mechanistic enzymology, used to identify mechanisms of catalysis and regulation, is integrated with cutting-edge bioinformatics techniques to identify patterns of evolution within an enzyme superfamily. The DRE-TIM metallolyase superfamily serves as a model system for this project due to its diversity of functions involving the making and breaking of C-C bonds and the allosterically regulated subgroup of Claisen-condensation-like enzymes including α-isopropylmalate synthase (IPMS) and citramalate synthase (CMS). Recent work has focused on comparing mechanisms of allostery and substrate selectivity in evolutionarily distinct IPMS and CMS enzymes. Future projects include functional annotation of enzymes of unknown function in the DRE-TIM metallolyase superfamily, identifying mechanisms of functional evolution between subgroups of the superfamily, and using directed evolution approaches to engineer enzymes with novel C-C bond making and breaking abilities.

Back to top
2. Investigating Mechanisms of Functional and Catalytic Diversity in Glycosyltranferases
The target of this project is a large class of enzymes called glycosyltransferases (GT). This class of enzymes catalyzes the transfer of a sugar molecule (such as glucose) from a nucleotide donor (NDP) to either oxygen or nitrogen atoms in various acceptor molecules including proteins, nucleic acids, lipids, and small molecules. This reaction is involved in many cellular processes such as bacterial cell wall biosynthesis and the cell’s ability to sense its environment. Despite the variety of acceptor molecules, the 3D structures of all GT enzymes to date (nearly 800 individual structures) fall into one of two structures, termed GT-A and GT-B.

The GT-A motif is characterized by two independent globular domains in compact association. In contrast, the GT-B motif is more extended and composed of two domains connected by a small linker region. The chemical reaction takes place at the interface of the two domains in both structures. As the two structures are strongly conserved despite the diversity of substrates, we hypothesize that there are regions of the structure critical to function in this class of enzymes. This project integrates biochemical, structural, and bioinformatics approaches to identify structure/function relationships in this enzyme class.

Recently, in conjunction with the Busenlehner laboratory, we utilized backbone amide hydrogen/deuterium exchange to identify regions of both GT-A and GT-B enzymes that undergo changes in flexibility upon substrate binding. In the future we will apply bioinformatics and biochemical approaches to investigate if areas with differences in flexibility are evolutionarily conserved and determine their contribution to catalysis. Results from these studies may support the development of novel inhibitors against this important class of enzymes. 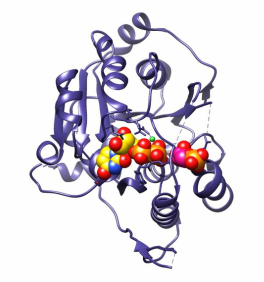 Glucosyl-3-phosphoglycerate synthase from Mycobacterium tuberculosis (PDB 3E25)
Back to top
III. Conformational Dynamics and Allosteric Regulation During Stress Response Metallofactor Assembly
Supported by NIH 1R01GM112919-01 originally by Dr. Laura S. Busenlehner
Many pathogenic bacteria must compete with the mammalian host for the essential metal iron, even as the host sequesters circulating iron and releases reactive oxygen intermediates to damage bacterial metalloenzymes as its first line of defense.

Iron-sulfur (Fe-S) cluster cofactor biogenesis is critical to the survival of bacterial pathogens. A concerted multi-protein system encoded by the suf operon provides bacteria with a protected Fe-S biogenesis pathway under these conditions, which are detrimental to thiol and iron chemistry. The suf operon, conserved in Escherichia coli and in pathogenic Mycobacterium tuberculosis, encodes six proteins whose functions are still being elucidated.

We use a combination of genetic, biochemical, and structural techniques to investigate protein-protein interactions that are critical for cluster biosynthesis with the long term goal of disrupting those interactions with novel, rationally designed antibiotics. This project was originally developed by Dr. Laura S. Busenlehner and has recently been incorporated into the Frantom lab upon her passing. 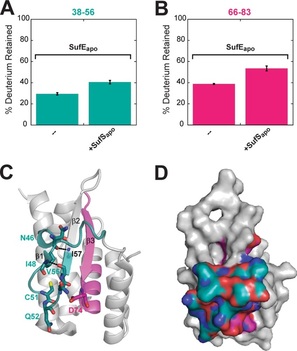